14 December 2017
Black Lawrence Press will run a short feature on Xi Draconis Books in its weekly e-newsletter, Sapling Blog, on 8 January 2018. The feature will showcase an interview with Xi Draconis editor-in-chief, Patrick Barney. Head over here to purchase a subscription, or, if you’re patient, this website will post the feature on 22 January 2018.

7 December 2017
Check out an excerpt from Hans Burger’s In Some Sense Innocent here.

6 November 2017
We’ve conducted a video interview with Hans Burger, author of In Some Sense Innocent, the first publication of Xi Draconis Books. Check it out to get a deeper sense of the issues that Mr. Burger’s novel addresses, and (for potential submitters) of the tastes of Patrick Barney, editor-in-chief.

26 October 2017
Pre-orders of In Some Sense Innocent are available now! Copies will ship 7 January 2018. Head to the Books page to reserve your copy.

25 October 2017
Check out the cover design for Hans Burger’s novel In Some Sense Innocent: 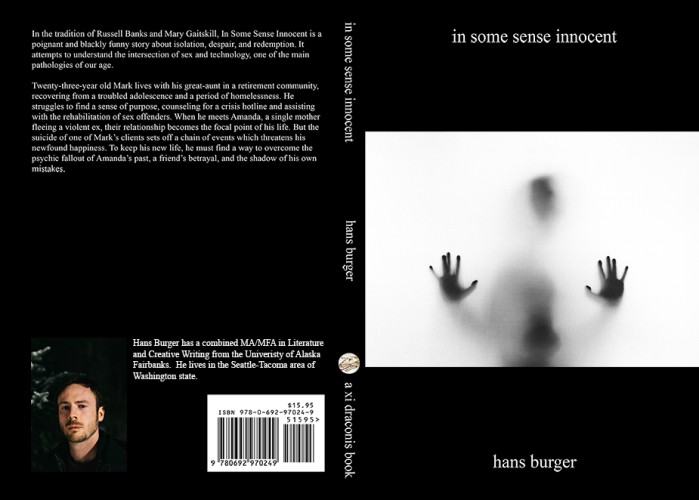 The release date for the print version of the book is 7 January 2018. Digital copies will be available for purchase two months later.

Xi Draconis Books is excited to announce the upcoming release, in January 2018, of its first publication, Hans Burger’s novel In Some Sense Innocent.

In the tradition of Russell Banks and Mary Gaitskill, In Some Sense Innocent is a poignant and blackly funny story about isolation, despair, and redemption. It attempts to understand the intersection of sex and technology, one of the main pathologies of our age.

Twenty-three-year old Mark lives with his great-aunt in a retirement community, recovering from a troubled adolescence and a period of homelessness. He struggles to find a sense of purpose, counseling for a crisis hotline and assisting with the rehabilitation of sex offenders. When he meets Amanda, a single mother fleeing a violent ex, their relationship becomes the focal point of his life. But the suicide of one of Mark’s clients sets off a chain of events which threatens his newfound happiness. To keep his new life, he must find a way to overcome the psychic fallout of Amanda’s past, a friend’s betrayal, and the shadow of his own mistakes.

Hans Burger has a combined MA/MFA in Literature and Creative Writing from the University of Alaska Fairbanks. He lives in the Seattle-Tacoma area of Washington state.